What is Optical Engine?

The optical module can be completed by assembling the optical engine and additional blocks as shown in the figure below. In the optical transceiver, the additional block is composed of customized lens and fiber. In the TOF sensor module, which is a kind of optical sensor, the diffuser, lens and its holder are used as an additional block. In particular, the optical engine manufactured with O-SIP provides robust advantages in the assembly because the optical element is completely passivated. If an optical device, vulnerable to external environment and contamination, is used in the form of a conventional chip on board, problems may occur during the assembly process, but the passivated O-SIP has improved ease assembly and robust reliability. 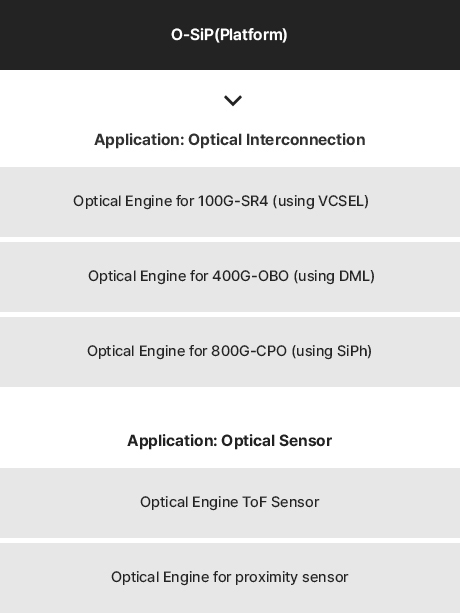 Module assembly for the O-SIP optical engine is generally performed in the following order: 1) SMT on PCB, 2) Additional Optical Block assembly, and 3) Housing assembly. Compared with the existing COB method, the die bonding and wire bonding processes can be omitted.

The above procedure may vary depending on the application, but for better understanding, the typical procedure of manufacturing the optical transceiver by the O-SIP 100G-SR4 optical engine is shown in the figure below.

After preparing the components for SMT (O-SIP, electronic device, PCB), the prepared components are mounted on the PCB through the SMT process. After aligning and fixing the O-SIP and lens on the mounted PCB, the optical fibers are connected to the lens and additional optical components (Jumper, MT Ferrule, etc.) are assembled. Finally, assemble the prepared module into the QSFP type transceiver housing.